Pastor Zoe Obinna Ogugua is a native of Awka in Anambra State. He is the first son and Seventh (7th) child in a family of nine (9) children. He was born in Bamenda, Cameroon on the 27th day of the Seventh (7th) month in the year 1979. There, he completed his Primary Education at Government Bilingual Primary School (GBPS) and also City College of Commerce (C.C.C.). After his Form One, he returned to Nigeria and continued his Secondary Education in Lagos at Imoye High School. There he had an encounter with the Lord at the age of 12 (and he was on fire for the Lord, even preaching on buses at that age).

His faith was pierced and punctured by the cares and affairs of this world after his secondary education, which cost him his ambition of studying Medicine & Surgery at Nnamdi Azikiwe University, Awka. Due to a bad lifestyle, he had to run for his life.
He ventured into business and also made several attempts to travel outside Nigeria for greener pastures, all to no avail. He later became a gangster and eventually, the mercies of God caught up with him again. He attended some denominational churches like Christ Embassy, etc but couldn’t stay (he wasn’t comfortable with the things he experienced there).
He later attended Christ Pentecostal Church (C.P.C.) where the Lord used him to establish the first branch of the church at Awka, his hometown, even though he was just a church member.
The Lord gave him a job at D. Majesty West Africa Limited (incorporated in Italy), where he worked as the Field Operations Manager.

Then in 2006, the Lord guided his footsteps to the Bride Assembly Church, where his eyes of understanding were opened. From then, he functioned in various departments simultaneously.

Despite the misfortunes we may experience, there is always an opportunity to choose love and rise above resentment and fear. The Bible was created to remind us of such truth and to encourage us to believe in the goodness of life and God. 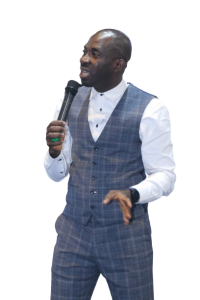 · In 2006, he joined the Church Intercessory Department and in 2010, he became the Church Intercessory Leader, and presently he is the coordinator of the Church Intercessory Department (It is segmented into Seven (7) groups that intercede 24hours a day and 7days a week for the Church).
· He joined the Youth Fellowship in 2007 and became the Youth Intercessory Leader in 2008.
· He was the Singles Fellowship President in 2011. He was also an executive member in the evangelical department of the Church.
· He joined the BrideTV in 2013, and anchors the Doctrinal Issues.
· He became an Ordained Minister in the year 2015, and joined the Pastoral Board as an Associate Pastor in 2017
· He is presently the Prayer Group Coordinator and the Church Provost.
Certainly, there is a divine arrangement in the life of Pastor Zoe since birth being the 7th Child, born on the 27th of the 7th month, and in the 70s, in the 7th Church age. He located the Bride Assembly after the Church was 7 years old. He got married to the 7th Child of the family.
Pastor Zoe is married to Sister Asinedu Ogugua (Nee Ossai) from Ndokwa East, Delta State, Nigeria. They are blessed with three Children – King-Zoe Ogugua, Katriel-Blessing Ogugua and Krysta-Clear Ogugua

× You are Welcome. How can we help you?